A blogger hacked fraudsters who tried to deceive him, then showed them an image from their own web-camera 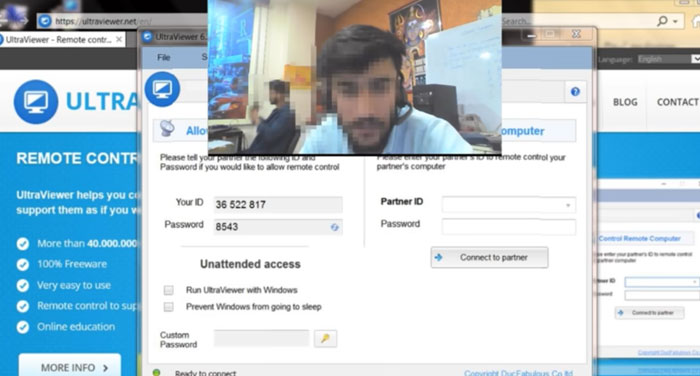 Internet scammers should be prepared for the fact that the “fish” they are trying to catch with their hook may not be so easy to catch. This is exactly what happened to the careless scammers who tried to deceive the Indian blogger Scambaiter.

Scambaiter demonstrated how he managed to outwit an attacker and get him to show his face through a webcam in his YouTube video, which received more than 15 million views in less than one month.

According to Scambaiter, he first received a phishing email purportedly from Amazon. According to the letter, an order was placed in his name, and if he did not order anything, then he needs to call the specified phone number and demand a refund.

“As soon as you call this number, you are connected to a call centre in India. “We will send you a verification code, please help me with the verification you receive.” What the scammer does is pretend to send a verification message from Amazon to the victim. Well, the message is indeed from Amazon, but it is for a password reset, ”said Scambaiter.

After the fraudster logged into the system and changed the victim’s password, he began to hunt down information and look for the credit card attached to the Amazon account.

“I decided to run a GPS scan on a reverse proxy on this camera’s network, and those coordinates took me north of New Delhi,” Scambaiter said.

After calculating the fraudster’s IP address and finding out the location of the call centre, the blogger even found in his files the identities of two employees and a document with an extortion scenario. Based on the data specified in the certificate, Scambaiter found a Facebook page of a call centre employee, thanks to which he was able to find out many details of his personal life.

While continuing to chat with the unsuspecting fraudster, Scambaiter hacked into his webcam and displayed the image from it on the screen of his laptop. When the attacker tried to go further and convince the “victim” to install TeamViewer software to remotely access her computer, he suddenly saw an image from his own web camera on the screen. He tried to hide from the camera, but Scambaiter began to pressure him, claiming that he knew everything about him and his “company”. The fraudster got scared, and while he and his colleagues tried to decide what to do next, the blogger continued to mock him.