False positive: Malwarebytes blocks Google and YouTube due to a threat

Malwarebytes antivirus software developers are working on fixing a bug due to which users could not access sites located in the google.com domain (including Google search and YouTube). With similar web services, the same trouble is fixed.

According to many complaints from users, it is impossible to access Google sites in browsers, as Malwarebytes sees them as a threat. As a result, resources were simply blocked, and it was possible to visit them only after Malwarebytes was disabled.

In particular, users noted a “flurry of notifications about malicious sites” that mentioned google.com subdomains. On the Downdetector site, one of the clients commented on the situation as follows:

“Looks like Malwarebytes has released a buggy update. I can’t visit any of the Google sites because I get endless threat notifications. I tried turning off real-time protection – the error is gone.

The developers quickly took note of the many complaints and explained that the problems were caused by the web filtering module. On Twitter, representatives of the company wrote:

“We are aware of an issue with the web filtering component that may block a number of websites, including google.com.” 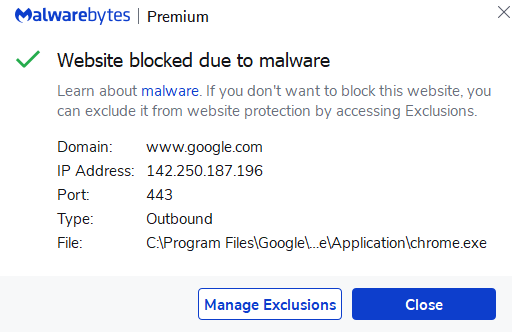 As one of the users already noted, there is a completely logical way out of the situation: turn off the “Web Protection“ option, which works in real-time. The second option is to wait for the release of update 1.0.60360, which the developers talked about on the forum.