A user on the infamous online imageboard 4chan has put more than 130 gigabytes of data from streaming platform Twitch online. The leak includes:

In the same post, the user states that they have leaked the data because they believe that there is too little competition and disruption in the streaming world. In addition, Twitch does too little against abuse in and out of the community: “their community is a disgusting toxic cesspool.”

An anonymous source within Twitch has already confirmed to fellow journalists that the data is real and that the data was probably stolen last Monday (October 4, 2021).

The leak also includes information about the earnings of likely all streamers who partner with Twitch. This includes big-name streamers that attract tens of thousands of viewers every day, such as Asmongold, Amouranth, Shroud, Dr Lupo and others. It shows that Twitch paid out millions to the big names on the platform between 2019 and 2021 alone. High earners are RPG channel Critical Role with over $9.5 million, former pro Overwatch player xQc with $8.4 million and pro-counter-strike player Summit1g with $5.8 million.. This revenue includes only what Twitch distributes itself, which amounts to revenue from ads, bits and subs. Large streamers also earn much more, with income from, for example, donations, sponsorship deals.

The income of Dutch-speaking streamers was also stolen in this leak. In most cases, this concerns less spectacular amounts than xQc with its 250,000 dollars per month, but the popular Dutch streamers also know how to earn their living on the streaming platform. At the top is Serpent gameplay with just under $ 170,000 since 2019. Lekkerspelen is also doing well, with more than $ 120,000. It’s all about a lot of money, but streaming is of course more than just playing games. It takes these streamers a lot of blood, sweat and overtime to get and keep their channel at this level. The only bright spot for the streamers is that this puts them back in the spotlight. What should I do as a Twitch user?

Given the scale of the hack, it is likely that user data has also been leaked. It is therefore important that as a Twitch user you change your password and activate two-factor authentication. Have you also used the password for other services? Make sure you change the password there and switch to a secure password manager with unique passwords as soon as possible. Update: If you now try to log in to Twitch, the platform itself will already ask you to set a new password.

The hack involves more than 130 GB of data and files, so it will take a few days before it becomes completely clear what else has been leaked. The hacker indicates that this is “just the beginning” of the data that was stolen from Twitch. Twitch has since publicly responded. Twitch suspects that malicious people have entered a server through a misconfiguration. Twitch also states that no credit card information is stored and that user data is unlikely to have been stolen. It remains to be seen whether and what else the hackers will publish online.

We can confirm a breach has taken place. Our teams are working with urgency to understand the extent of this. We will update the community as soon as additional information is available. Thank you for bearing with us.

The Consequences of This Twitch Leak

Media outlets have dug into Google Trends and it shows that search terms like “Twitch data”, “4chan Twitch” and “Twitch password” go through the roof with more than 50x the normal volume. Users are seeking details about the leaked information and are clearly concerned about the security of their accounts and data. A security analyst had said:

“It’s been quite a bad week for the biggest and most powerful companies on the internet. After the Giga failure at Facebook, Amazon clearly has an even bigger problem with this data breach at Twitch. Data breaches are common, but we rarely see a site exposed right down to the source code. Billions of people trust big companies like Amazon, Twitch and Facebook with their personal data, but it is becoming increasingly clear that they are unable to guarantee this trust.”

The consequences of such a huge leak at a big company like Twitch go beyond just the viewing pleasure of gamers:

“This leak and the failure of Facebook’s services make it all too clear how vulnerable the digital infrastructure of our society really is. Considerable thought needs to be given to how we can limit our dependence on digital networks. In addition, there must be clear plans about what should happen if the important infrastructure is lost. Recently, all train traffic in the Netherlands was stopped for a few hours because a backup telephone line was not working properly; what do we do if this happens for a longer period of time? You can bet there are cybercriminals and state hackers trying to get into this kind of infrastructure every day. “

Reactions from streamers, users and the media

Streamers have now also realized that something big has happened, below are some reactions:

Tarkov streamer Deadlyslob hears in his Livestream with more than 3000 viewers that his data has also been leaked.

When asked whether he would switch to a different or new streaming platform, he says the following:

In any case, the chat responds positively! The search term ‘How much do Twitch streamers earn’ shows how many people were actually curious about this information. 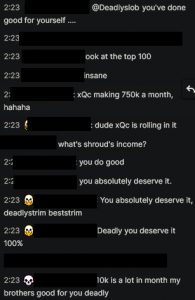 Previous articleFacebook, Instagram and WhatsApp off air all evening
Next articleIn attack on SolarWinds, hackers stole data on sanctions against Russia