According to some reports, the responsibility for the incident lies with the cyber ransomware group Ryuk.

The third-largest city in Belgium, Liege, was subjected to a cyberattack using ransomware that brought down the IT network and online services of the municipality. As a result, all appointments at the city administration, weddings, funerals and the issuance of birth certificates were cancelled, since civil servants lost access to the city’s IT network. Online forms for applying for permission to hold public events and parking were also unavailable.

Although representatives of the city administration reported only that the IT network of Liege was affected by a “computer attack,” according to several Belgian radio stations and TV channels, the cyber ransomware group Ryuk is responsible for the incident. Whether the municipality intends to pay the ransom to cybercriminals is unknown. 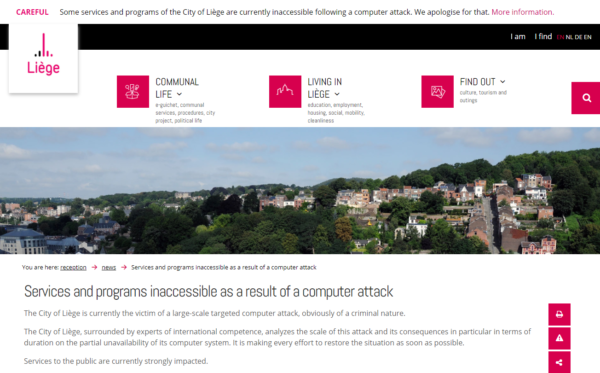 Ransomware attacks on municipal IT networks are by no means out of the ordinary. On the contrary, urban networks very often fall prey to hackers, since the municipality cannot always afford high-level cyber defence and new computer equipment. Often, city administrations use outdated computers and servers, and IT staff is kept to a minimum.

At one time, such American cities as Tulsa, Atlanta, Baltimore, Denver, Knoxville, Pensacola and New Orleans suffered from ransomware attacks.