These are the best antivirus scanners according to AV-TEST

AV-TEST has compiled a list of the best antivirus software packages for Windows computers that you can get right now. The German institute tested twenty-one antivirus scanners from renowned companies for six months. Five AV programs took home the highest possible score, two of which are completely free.

The results of AV-TEST can be found on its website.

This is what you need to know about antivirus programs

Viruses, worms, Trojan horses, spyware, rootkits: the Internet has many dangers. It’s important to protect yourself against this: before you know it, your computer stops working, confidential data ends up in the wrong hands, or all your files are locked and locked. Full recovery from a malicious virus or another form of malware often takes months, if at all.

The best way to protect yourself from such digital threats is to use an antivirus program. It scans your (mobile) devices in real-time for suspicious codes, identifies them and removes them. An antivirus package relies on a ‘blacklist’: a list containing all the dangers known to the manufacturer. If a virus scanner encounters something that is on this blacklist, the program springs into action.

Those looking for an antivirus program have more than enough choice: all in all, there are dozens, if not hundreds of AV programs. How do you know which one is right for you? First of all, you obviously need to get a package that is compatible with your device’s operating system. With most antivirus scanners this is fine. It is also good to look carefully at the extra options that each package offers, the number of licenses, the price, reviews, user-friendliness and accessibility of customer service.

But the most important aspect of an antivirus program is its effectiveness. In other words, what digital threats does he know and do he face in action? The difference between 95 per cent and 98 per cent may seem small, but it can mean the difference between a safe and an infected computer.

How do you know which antivirus is the most effective? You can consult user reviews for this. The best way to get an answer to this question is to study the test results of test institutes.

These are the five best antivirus scanners

AV-TEST has rated each antivirus program on three categories: protection, performance and usability. In each category, the company awarded a maximum of six points, at intervals of 0.1. 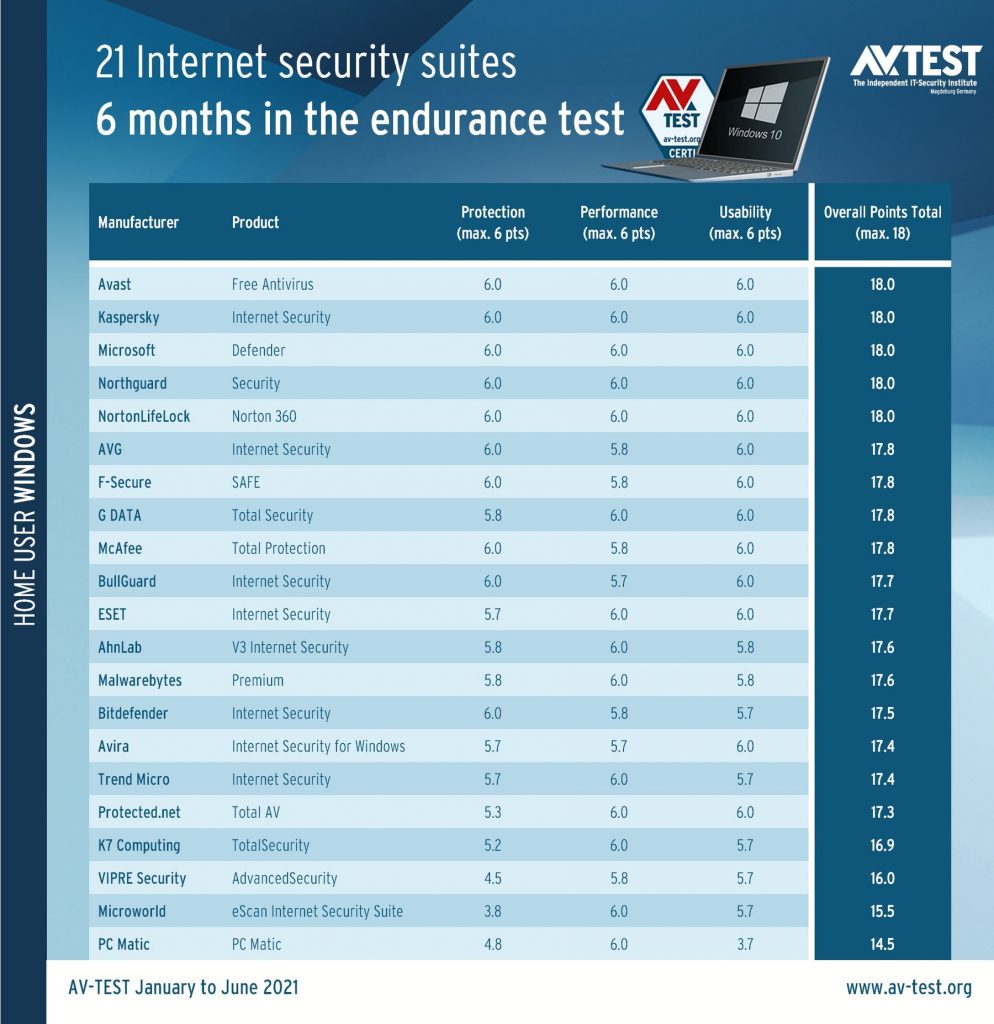 This is how AV-TEST tested the antivirus programs

Every AV program was bombarded with nearly 50,000 computer viruses and other types of threats, including zero-day malware. Most antivirus scanners had no problem with this. PC Matic, VIPRE Security, and Microworld were the most likely to fail.

The researchers also looked at the system load of the antivirus programs. Before that, they launched multiple websites and computer programs, simultaneously downloading and copying data while the AV program was running in the background. Fourteen of the twenty-one packages achieved the maximum score of six points. AVG, Avira, Bitdefender, BullGuard, F-Secure, McAfee and VIPRE Security had the heaviest system load.

Finally, AV-TEST looked at the usability of the antivirus programs. To say something about that, they looked at which security packages gave the most false positives. This means that alarm bells are going off when in reality nothing is wrong. Thirteen antivirus scanners achieved the full six points. Ahnlab and Malwarebytes scored slightly worse with 5.8 points. PC Matic most often reported a false positive: this package managed to achieve only 3.7 points in this category.

The fact that two free AV packages made it to the top five was a big surprise to the researchers. Avast Free Antivirus is free to download, Microsoft Defender is the built-in antivirus in Windows 10. “It showed impeccable performance in the endurance test (…) For basic security without bells and whistles, we recommend Defender without reservation,” the researchers write.